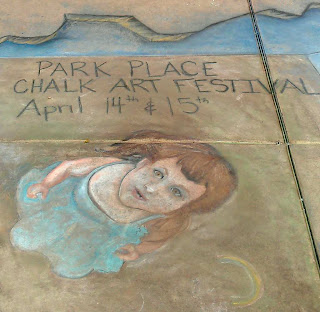 Though it was a busy weekend for me (Tucson Artists' Open Studios and a great concert by the Southern Arizona Symphony), I stopped by Park Place Mall for a quick look at the inaugural Chalk Art Festival. What a crowd — of both spectators and artists! 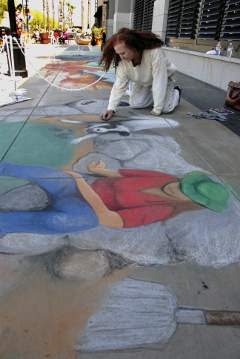 I've heard that the murals will be up for the next few days (along the north side of the mall, west from the Sears store). So I decided to come back and try to catch some better photos.

As I was about to leave, I saw a familiar artist's name. Cindy Guare had just contacted Randy last week to let us know that she painted the God's hands mural as well as the amazing Girl Scout mural. The scout mural took an entire year to paint, she told me yesterday.

If you'd like to see more of Cindy's work, her website is CindyGuareArt.com. And there are more photos (and a video) of the entire show in our next post, Park Place Chalk Art Festival revisited.
Posted by Jerry Peek at 12:45 PM