Back on May 25, 2009, we posted a couple of photos of this art-covered school. Back then, at least, it was named Davis Bilingual Learning Center. I'm not sure of the latest taste in school names, so I'll just call it Davis Bilingual School. Around the grounds is a lot of art in (naturally enough) both Spanish and English. If you click there, you can see the two photos I posted in 2009. Here are some more from August 22, 2012.

Let's start with a better photo of the the bench I showed in the 2009 post. In the middle of the center of the seat, it's signed Made by Los Artistas de Davis 2004 and also says In Memory of Melissa Gomez.: 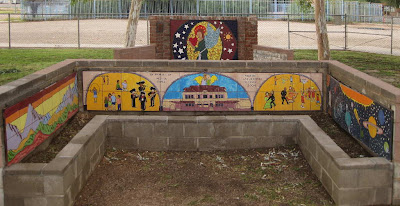 A mural in an arch at the northeast side of the school, with a sign saying Dr. Valenzuela 1981-2011, and a close-up of the plaque toward the top: 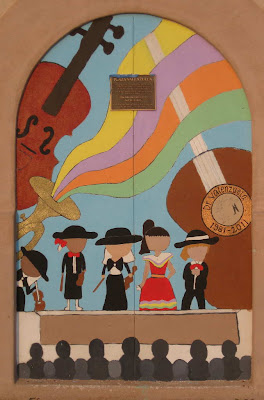 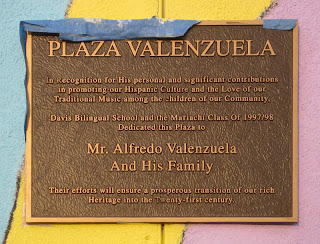 As always, you can click on a photo for a larger view.

(By the way, there are more mural-filled arches on the south side of the school. You can see some of them in the first photo on the previous post I mentioned.)

Let's finish with a mosaic plaque at the southwest entrance to this art-filled place: 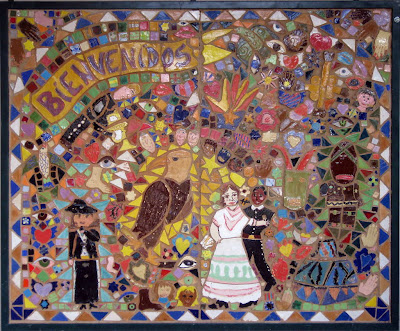 You can see this — and more — at 500 W. St. Marys (corner of Granada). The grounds may may be locked up this summer; I haven't checked. During the year, I'd recommend you check in at the school office before looking around. I got there early in the morning — after the grounds were open, but before the students did.