Luis Gustavo Mena has been painting murals in Tucson since the 1970s. Mena is one of eight artists who was chosen to paint in the first (but, I hope, not the last!) series of new downtown murals. You've seen his work in places like Broadway next to the Garces footbridge, in the new Parque de San Cosme near the fire station downtown, and my favorite (of the ones I've found so far, that is): Native Americans facing Columbus’ ships coming across the Atlantic.

Mena's mural covered a notoriously-tagged corner at the corner of North 6th & East Pennington. Back in 2008, it was one of the first murals we covered on this blog:

In the Shadows of Downtown

Then the taggers took over, as you can see in this series from Google Street View. (Each link will open a new window or tab. When you close it, this page will still be here.)
Fast-forward to 2016. On May 1st, he had outlines drawn. After the overview (you can click for a closer view, as always) is a closeup looking out from the center. The mural extends onto the curved ceiling: 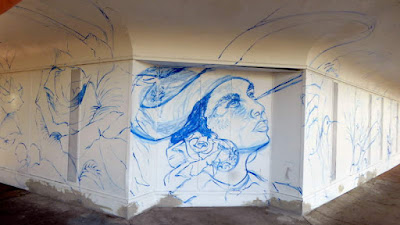 Here are two photos from May 8th. The outlines are surrounded in blue, and there's a bit of yellow. (That yellow area will change later during the month; look ahead to June 4th.) The first shows the south-facing wall; the other shows the corner and east-facing wall: 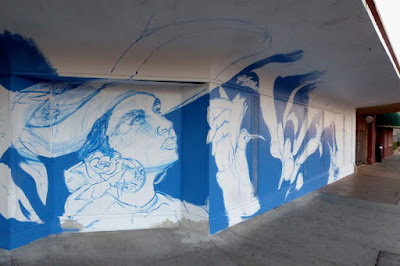 There wasn't much change by May 14th:

Let's jump ahead five days to May 19th. The left end looks about the same, but Mena has been working on the right end. There's more golden color and more painted-out area at the right end:

He did a lot of work in the next 11 days! There's color everywhere on May 30th: 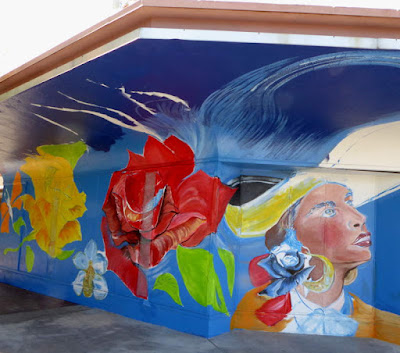 On June 4th, the mural is looking nearly finished to me. Mena hasn't needed scaffolding, and he hasn't put barriers around the mural (maybe because it's next to an active sidewalk), so it was hard for me to be sure. Notice the change on the left side of the mural just to the right of the post:

Past sunset on June 11th, he was putting finishing touches on the mural when I caught up with him there: 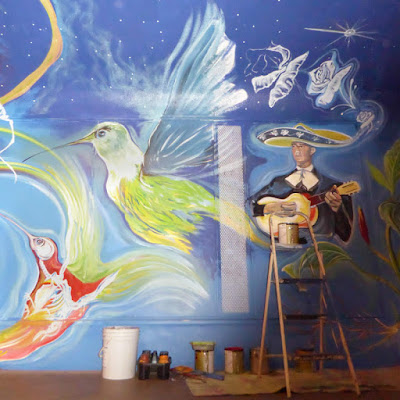 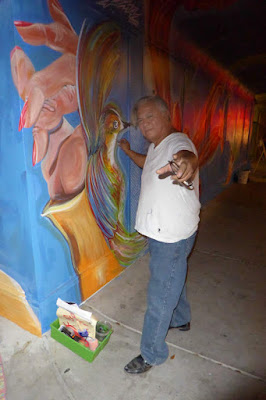 On June 19th, it looked to me like the mural had been finished: 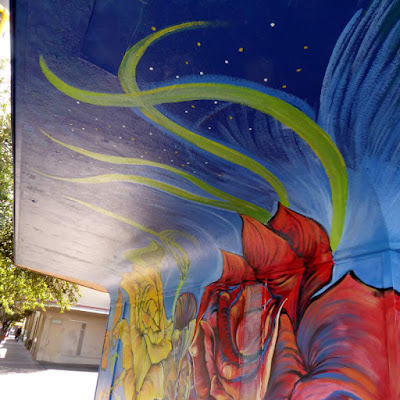 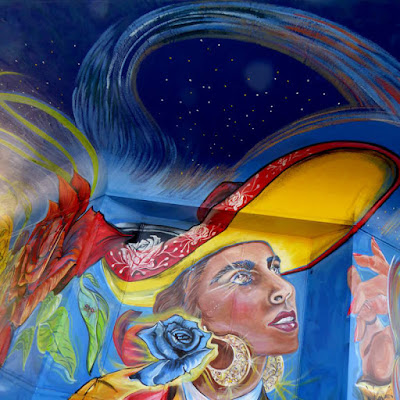 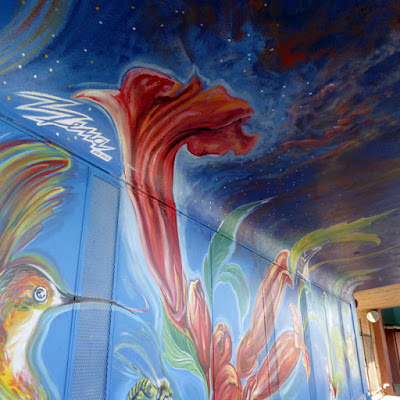 We'll wrap up this series of eight new murals on Thursday.