We're at the last of this series, each showing the prgress of a mural from a blank white wall (in most cases) to a finished and spectacular work of art. (By the way, we're posting this on Friday, instead of the usual Thursday, because the blog's tenth anniversary is this coming Tuesday. So next week's schedule will be pushed back by a day.)

The eighth mural is on Fifth Avenue, just north of Broadway. The wall stayed blank for quite a while after other artists had started their murals. Here's the view on May 1st, May 8th, May 14th, May 19th, and May 30th: 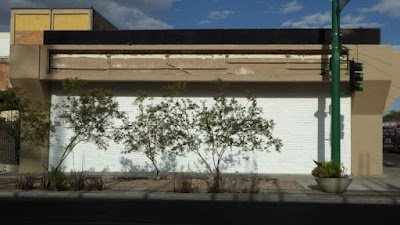 When I saw the mural start to take shape on my June 4th visit, I realized that it was completely different that Pete Goldlust's design shown at the Downtown Mural Project design open house held April 28th. (If you'd like to see it, click that link and scroll down.) Not long after, I read that the artist was now To-Ree-Nee Wolf Keiser: 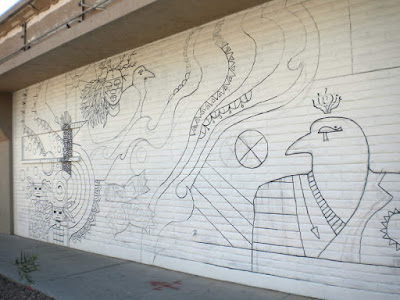 The camera I used this time couldn't quite fit in the whole mural due to the light post at the right edge. So here's a shot from across the street: 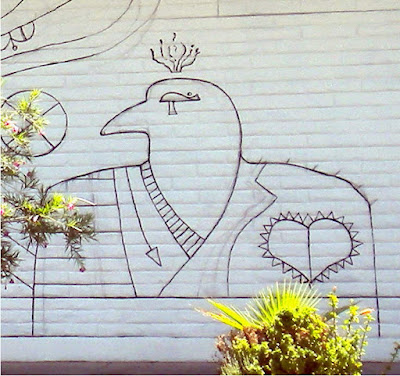 June 10th, there was color at the ends and bottom center. I brought the same camera that wouldn't show the entire mural, so here are (most of) the two ends: 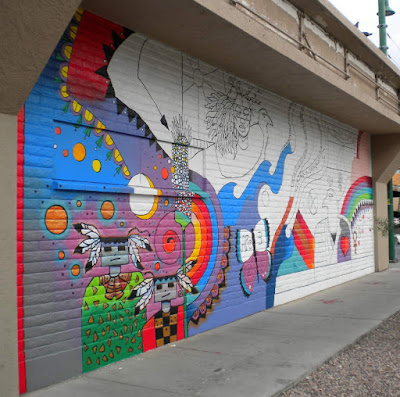 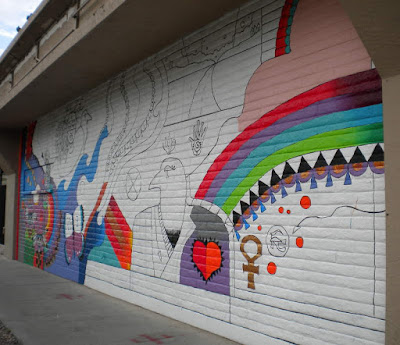 The murals were looking nearly finished on June 19th, with a couple of white spots : 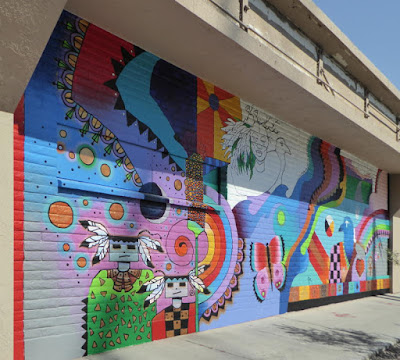 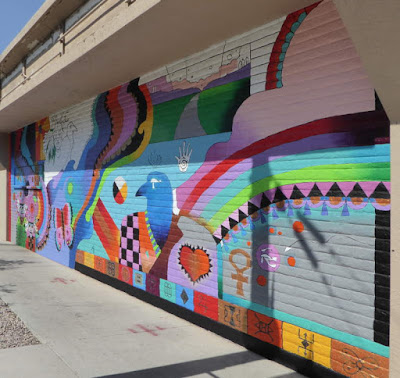 June 27th, there were a couple of white areas: an irregular shape at the center and a rectangular one at top right. The top right had dots in it: 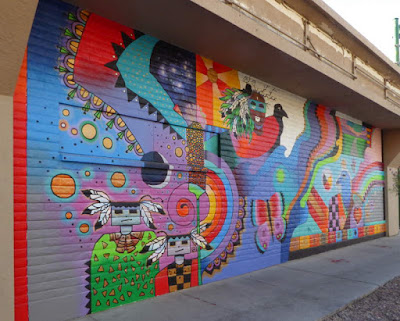 Thanks to a tip from David Aber, I met the artist in person on July 4th. She talked about different parts of the design (which I should have made notes about!) and filled in the white rectangle shown at the top right above: 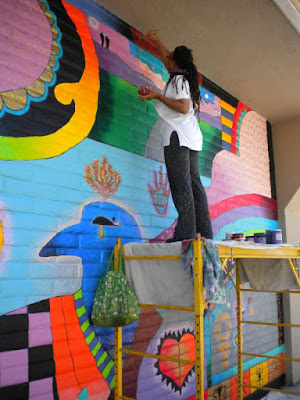 When I came by this morning (Friday July 8th), the platform was gone. I stood between the desert willows and the wall (I wish I'd tried that before instead of shooting from the ends), but it worked pretty well. I've stitched the three photos into one:

(As always, you can click on the photo for a bigger view.) The stitching has a couple of jumps near the top, but I think it gives a pretty good idea of the mural. It's definitely worth walking up and seeing it in person!

That's it for the eight mew murals from the Downtown Murals Project. This coming Tuesday is the tenth-anniversary blog entry… and Friday will be another entry. Then we'll get back to the normal Monday and Thursday schedule. Thanks for coming along!

According to the local paper, the title of the mural is "Creation Story, Chaos Theory and Quantum Memory". Quite a mouthful.