Here's a unique, heart-felt mural that was finished in May:

A nurse is giving pieces of herself to people and to a mother. Let's look closer, from right to left: 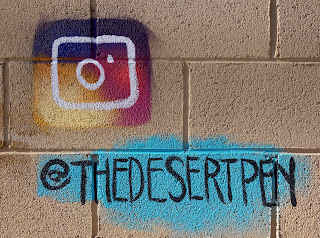 I found a photo toward the end of the July 10th Arizona Daily Star article Arizona coronavirus cases top 116,800; 11,172 in Tucson area. You might be able to see the photo by clicking there. In case it's gone by the time you see it, here's the photo caption:


Pen Macias, artist, works on part 2 of a mural for a client on E. Broadway Rd., between S. Columbus Blvd. and S. Alvernon Way, in Tucson, Ariz. on May 25, 2020. Macias, known as The Desert Pen, has been working on her clients mural for the past three months. "It's the one thing I love, I have a passion for and the only thing I could be happy doing," said Macias. The mural represents her client, a single mother of four who works in the health care field. One half of the mural is dedicated to the connection between mothers and their children. The other half is dedicated to the connection between nurses and patients. The client wanted some positivity in the mural to show how nurses give a piece of themselves to their patients hence the puzzle pieces in the nurse and the patients, said Macias.


The address below is just a guess that I plugged into Google Maps. It's actually on the wall to the west of 4222 E. Broadway, on the north side of Broadway. I took the photos on May 29th — which seems to be just a few days after she finished it.