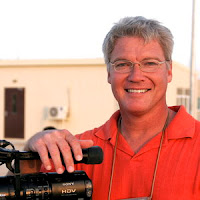 I'm so sad to tell you of Randy Garsee's untimely death. He passed away in his sleep this weekend at his home near Washington DC. He became one of two evening news anchors at KOLD in 1997; he and Kris Pickel took their nightly newscasts to the top of the ratings. He was popular for his outspoken, honest style as well as his friendliness and humor.

I joined the blog in May, 2007. Actually, he added me as co-author and then wrote to tell me that he had. I'd just sent in my first mural photo. Somehow Randy knew that I'd love doing this. Though he'd hoped to stay in Tucson, he may have known by then that he'd be moving on to another TV job. He next worked at KTEN in North Texas - Southern Oklahoma. Later he worked in Iraq as a journalist (and wrote two posts from there: No Murals in Iraq and While in Baghdad...). At the time of his death, Randy was communications and public affairs adviser for the Center for Naval Analyses and Institute for Public Research.

If you'd like to read more of and about Randy, here are links to some web pages. As Kris Pickel (his long-time co-anchor at KOLD 13) told me today, “I would include links with the caveat that there is more to every story.” Amen.
(Some of those links — like Randy's Facebook and LinkedIn pages — may eventually disappear. I'll leave them here in case they help someone track down the information some day.)

Update (November 8, 2020): Today I noticed an Arizona Daily Star interview with Randy that was published May 1, 2008: Former anchor's site documents city murals.
Posted by Jerry Peek at 10:50 AM


I wished Jerry I knew the words to express my appreciation for you and your kind words for Randy and keeping the Mural Project alive for him. I know he would very much like you doing this for him.

I Love him with all my heart
Robert Garsee