Catch Jos at work! (Murals being made, part 16) 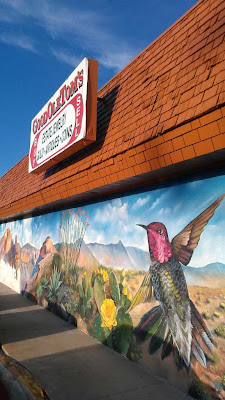 Even after seeing close to a thousand Tucson murals, I still seem to recognize new ones right away. Yesterday, eastbound on Broadway, I saw two. One was on a shuttered store; that's coming later. What really caught my attention was this mural, on the west side of Good Ole Tom's, 6305 E. Broadway.

This part of the mural seems mostly finished to me. (I tried to catch the artist, Jos — from Murals by Jos — to ask... but he'd just left.) As of sunset last night, other sides of the building were mostly empty white space. So, if you like to watch muralists at work, check the northeast corner of Broadway & Wilmot in the next few days. The district manager told me that they're hoping to have the murals done at the same time the store is ready for its grand opening.

Update (April 26, 2013): I've just posted photos of the murals being painted over these two months in murals being made, part 18.
Posted by Jerry Peek at 8:20 AM