Artistic gift to neighbors and passersby

A block west of the Downtown Clifton Hotel mural, owners of a home have commissioned three murals on the home's side facing the alley. (That's Rubio Alley, which Google Maps calls Rubio Avenue.) Kristin has written us twice: once with the first two photos below, then with the third photo. 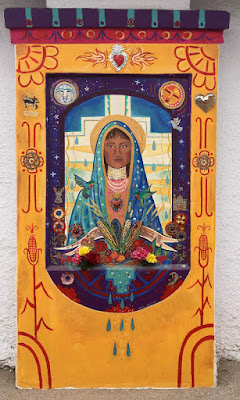 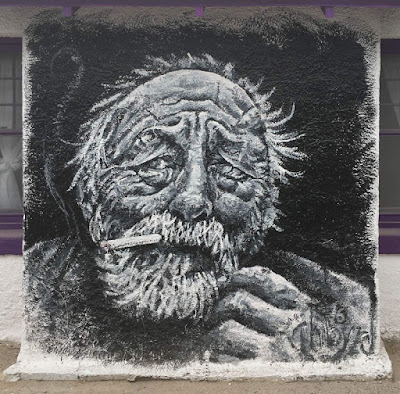 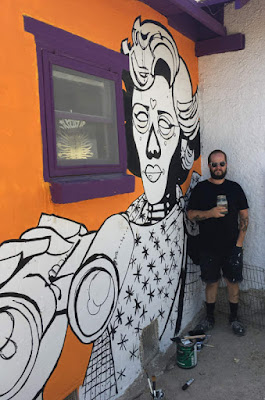 Here's what she wrote in the two messages:


We had these murals painted on the side of our house facing Rubio alley in Barrio Viejo.

The image of the virgin was painted by our very good long time friend Raechel Running. She is a photographer, writer, illustrator, and visual artist who hails from Flagstaff and now resides in Barrio Viejo in Tucson just around the corner from us! Her works include covering the greater southwest and the US/Mexico borderlands.

The second mural is a portrait of Artist and poet Jim Harrison that we commissioned just after his death in April 2016. It was created by a great long time friend from Flagstaff, Jaybyrd Willison. Jaybyrd has a colorful history (literally) painting portraits in oil, being an outlaw biker and no gooder-turned-philosophical-hermit and writer.

We have added to our collection as well since I emailed you last. I think you will be pleasantly surprised. We continue to commission new work and will hopefully have another in progress soon. I have attached one of the murals with the artist Danny Martin standing next to it.

Thanks very much, Kristin. I'm looking forward to stopping by and seeing the next mural.