You've heard the stories of Friday the 13th being unlucky, yes? Two days ago, on October 13, David Aber posted photos from a mural on the side of L. W. Cross Middle School. Or so he thought.

(This isn't important to read, but you might have fun with a story of two editors on an 11-year-old blog.)

After the photos went online, he realized that the mural was actually on the school next door: Harelson Elementary, at 826 W. Chapala Drive. On top of that, I'd included photos of the same mural in an blog entry I made four years ago, Mural Heaven at Harelson. He called me today (the 15th) to talk it over.

After ten years on this blog, with many hundreds of entries, it's not easy to keep all of it straight. Still, after ten years, I've gotten pretty good at twiddling things to (mostly) make it all work out.

Just by chance, when Dave called, I was editing new photos of murals I'd posted on the 6th. I'd meant to post the new photos on the 13th, but he posted first. So I'm moving his entry from the 13th to appear today — with this note at the top. (You can see his entry below.) And I've also posted the just-edited photos so they appear as if they went online on the 13th. If I'm lucky, even the links to his post on the 13th should take people to this revised version. I hope.

The L. W. Cross Middle School is in the Amphitheater Public School District and is located near Tohono Chul Park.  The mural is comprised of 231 tiles made by the school's Tile Club. 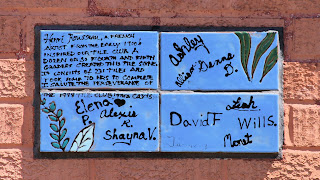 Photographed on Aug. 2, 2017.
Click on either photo for larger and sharper images.