Around the month we posted A few bold underwater human and alien fish (?) in mid-2016, a lot was changing on the mural hotspot of 191 East Toole Avenue. (If you haven't been there, it's worth a trip: There are murals on all but one side — and along Toole bordering the parking lot. Cross the tracks along 6th Avenue to see the building's north side.)

That blog entry has a couple of photos of a then-new mural by Joe Pagac:

That's an edited versions of one of Mark Fleming’s May 27, 2017 photos. There are more below.

The humans are holding clown fish, and their hair looks like sea anemone. It's a typically clever Joe Pagac mural. See the ramp at the left bottom, with some stuff along it? The buckets and cans could be for Joe's paint, and the ramp might be for him to reach part of the mural — though I think he finished the mural more than a year before Mark snapped these photos. 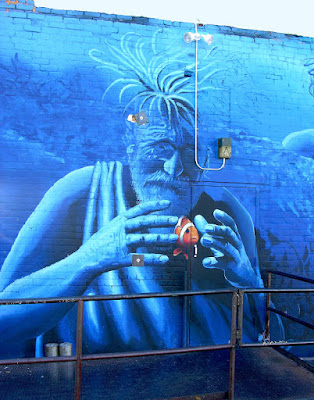 What's at the end of the ramp? I don't mean the security lamps. If you don't see it yet, look just under the fish's mouth: That's a door handle, attached to the door: 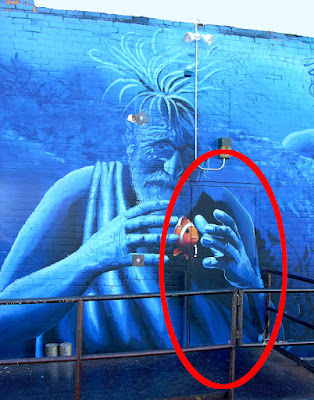 The only reason I noticed it, as I shot my photos from far away, was that the door opened as someone was waiting to go inside. (I may have lost that photo, but I'll watch for it.)

Let's wrap this up with more closeups from left to right: 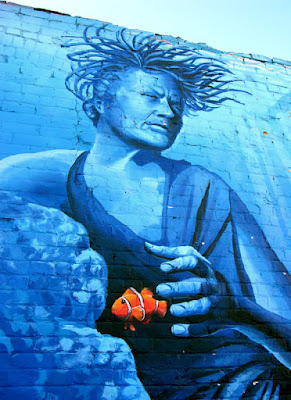 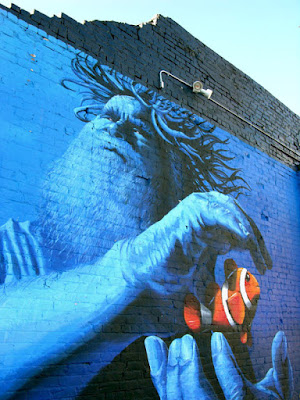 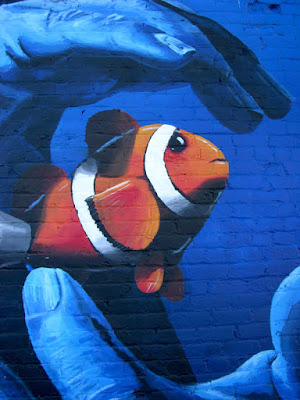 When David Aber spotted this blog entry, he wrote a couple of notes and sent links to two news articles:


1. The mural is titled "Harboring Beauty" and 2. Joe paid homeless men and women to pose for the mural.

Both stories below include photos and stories of other Pagac murals:

The Man Behind the Mural: Joe Pagac


Thanks for those tips, David!

Update (December 9, 2017): I found my photos of the opened door at the end of the ramp (circled in red above). Here's the best of them. I didn't catch the person walking in, but you can see that the door is open.