Murals being made, part 62: More animals on bicycles

Joe Pagac is at it again!

He posted that photo to Instagram on March 10th as he and co-muralists were starting to paint animals on bicycles over a rainbow-covered background along Court Avenue, just north of Alameda.

BG Boyd Photography sent the spectacular panorama below of the finished mural. As always, you can click on the photo for a larger version. You can also see all of BG's photos of the mural at https://bgboydphoto.com/murals/el_tour_de_tucson.

I stopped by the mural site on March 14th to see what was new: 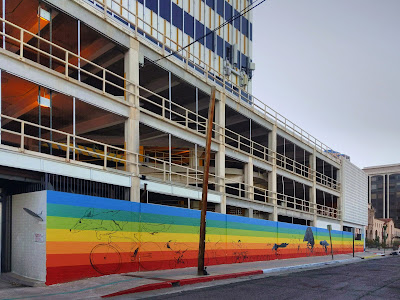 He's painted other murals with animals on bikes. The best-known is his Epic Rides mural (from the blog entry Murals being made, part 46c: Tucson's biggest):

Let's look at the whole mural in progress on March 14th from left (north end) to right (south end). As always, you can click on a photo for a slideshow of larger views:

A week later, on March 21, I read that the mural was finished. Here are views from the north end looking south, then the south end looking north:

Finally, the finished mural from left (north) to right (south): 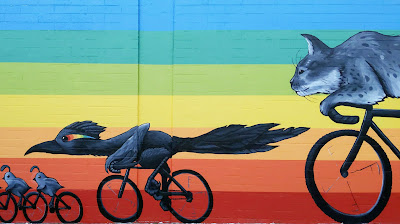 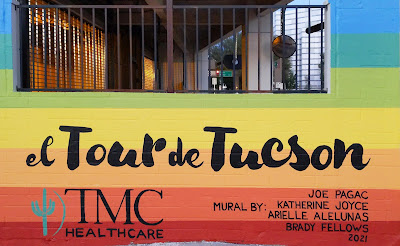