All around a mural maze

… with four sides at odd angles, wedged between the north-south 6th Avenue and the northwest-southeast Toole Avenue. The murals are usually as eclectic as the building.

This blog's page Layers of murals: histories of a few walls lists the zillions of blog posts over the past ten-plus years where we've been showing photos of this beast. If you haven't seen many of the photos, I think you'd have fun browsing those posts. (After you click on a post, use your browser's "back" or left-arrow button to go back to where you started.)

Two months ago — November 18, 2022 — I took a walk around the building to show you the latest version of all the walls. (I skipped a couple of murals next to the parking lot on the northwest side because cars covered parts of the murals… I'll include links to earlier photos of those. Also on the northwest side, the longstanding Rialto Theatre marquee mural was about to be repainted by Jessica Gonzales… I'll show before-and-after photos of that.)

I put captions above a mural or group of murals so you can see the info as you scroll down. Here goes!

On the left end of the southwest-facing wall (along Toole) is a place that might be best-known as Skrappys (no apostrophe), a gathering place with concerts and etc. Now there's just “191 Toole”: 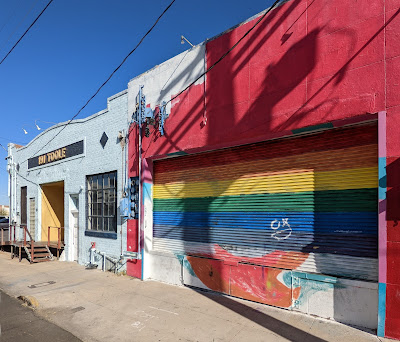 I'm not sure if the rainbow-painted garage is technically part of 191. The inside of this forner warehouse is a maze, and I don't remember what's where.

Next to the right is Studio ONE A Space for Art and Activism; click there for their Facebook page. It's been in this building for years. I believe they've painted at least some of the murals on the east wall of this building, which we'll see at the end of this tour: 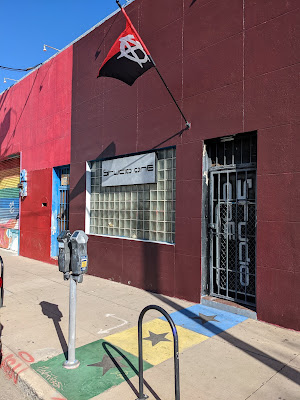 At the right end of the southwest-facing wall is BLX. It's been in (at least) two other locations over the years, and it's always had murals. My favorite was their location at Toole and 7th Avenues, where they had a ramp on the wall of their store so skateboarders could skate by a mural — which changed every few months. The September 19, 2016 post More posts, more Mark (more BLX!) has lots of the story and links that will take you to other murals. Here's the scene two months ago: 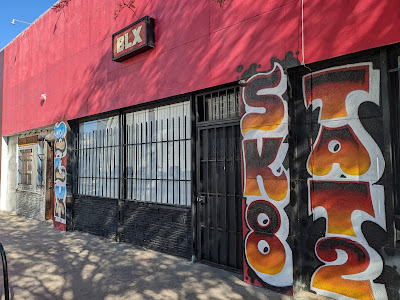 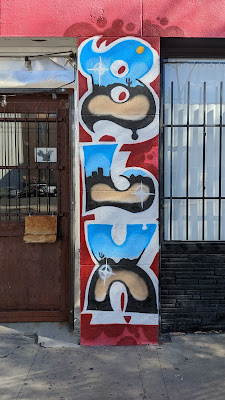 The southernmost corner isn't actually a corner. It's a tall and narrow flat area. Of course, it has a mural: 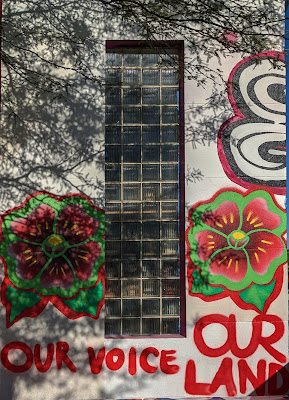 The east-facing wall (along 6th Avenue) has always been the place with a series of big murals. Here's a photo of the corner and the wall past it: 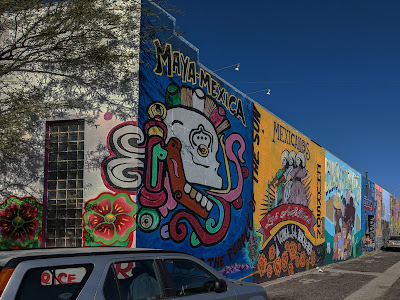 Even the low safety wall in front of the building wall is painted! 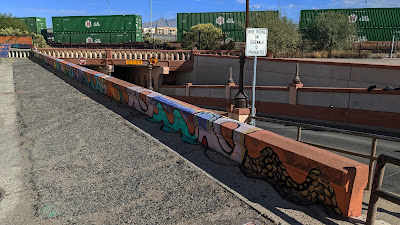 You have to stand on the other side of 6th Avenue to see the whole thing. First, a photo of the whole wall; then closeups from left to right: 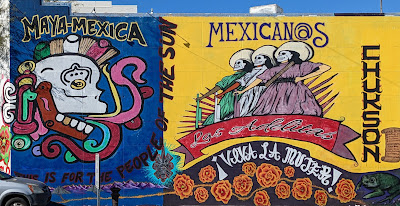 According to an Instagram post from @luxx.arte on August 10, 2021, the mural at the right side of the next-to-last photo above — the one with the Arizona Wildcat — was painted by Luxxarte member @lucksalway_aho from True Descendants.

As you can see in the Google Maps satellite view at the start of this post, the northeast side of the building is behind railroad tracks. During November, it was harder to get close to the tracks — and take photos through the fence by the tracks — because construction for the Downtown Links road project made me walk around from 6th Street, then through a gate that was (luckily) open. Here's the view, then closeups from left to right: 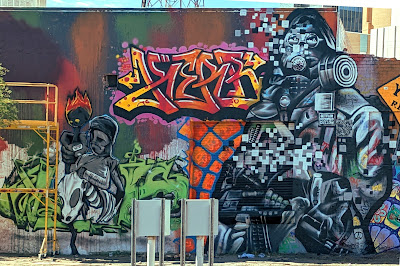 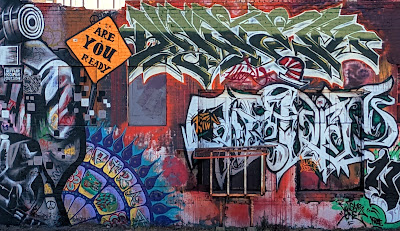 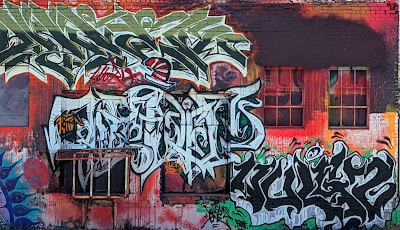 I walked back to 6th Street and along 6th Avenue and Toole to reach the fourth wall, the northwest side, with a parking lot along it. The blog already has photos of two of the murals. On June 12, 2016, we showed the wall in transition, including a photo of Joe Pagac's mural at the left end: A few bold underwater humans and alien fish (?). The white space in that post's first photo was replaced by a Danny Martin mural of Ted DeGrazia and a marquee that advertised upcoming shows at the Rialto Theatre: Rialto-style marquee on Toole goes all “Black Lives Matter”. Probably the most famous was Jackie Daytona mural in Tucson, Arizonia. In mid-December, 2022, Jessica Gonzales (and her new husband, I think) replaced everything to the right of Ted DeGrazia with a colorful new marquee mural, shown in this photo (thanks!) by BG Boyd Photography: 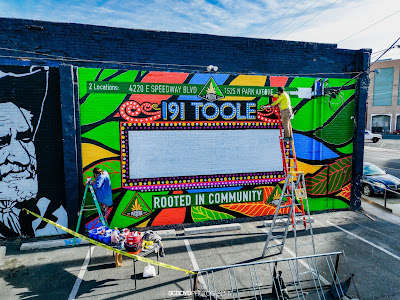 Jessica posted a photo of the mural complete with its first Rialto Theatre listing to Instagram on December 16th. (Instagram may require you to log in.)

The mural is surrounded by a background that I'm guessing is a mural sponsorship for The Prime Leaf, a business with two locations listed at the top. Jessica didn't mention this in her Instagram post… if I find out more, I'll update this post. (If you know, please either submit a comment at the end of this post — you can be anonymous — or use the "Contact Us" form along the right edge of this page.)
Posted by Jerry Peek at 6:01 AM