The mural on the northwest wall of 191 E. Toole (next to the parking lot) used to have a bizarre but also oddly welcoming scene of what looked like exterrestrial beings mixed into classic Tucson Scenes. That was back when the Skrappy's youth center occupied the building. That mural mostly disappeared around the time that another organization took over. Then the “Be Bold.” mural appeared, with parts of the formal extraterrestrial mural around the edges. Here's the photo I snapped on March 5th: 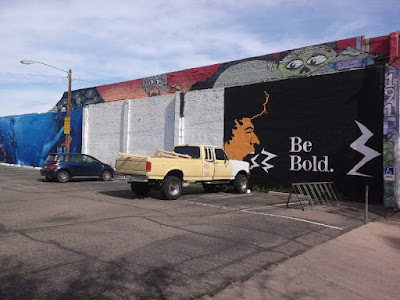 Here's a closeup. (As always, you can click for a larger view.)