Train, trolley, and a three-eyed alien 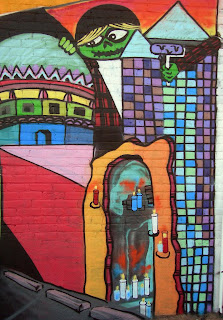 Next to the tracks, along one end of the Toole Parking Lot (191 E. Toole) is this wild mural that includes a bunch of Tucson landmarks, a guy (?) with a paint roller over the courthouse dome, a saguaro, a locomotive, the archway at El Tiradito, and much more. I'll let you find the alien yourself, but here’s a hint: look for the paper airplane.

Update (May 1, 2010): Here's another detail from the same mural at night (it's the second photo on that page). If you compare that photo to this one, you'll see that the later version of the mural has a lot more detail added in the “sky” and the doorways. (If you'd like to jump between the two, try your browser's "back" and "forward" buttons.)