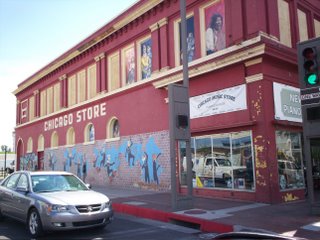 The Chicago Store, at 130 E. Congress, for years has had music inside and outside. Inside — as Mayor Jonathan Rothschild said in an interview (see below), the store “buys, sells, rents, trades and repairs all sorts of instruments from kazoos to pianos.” On two of the three outside walls were murals of musicians (photos above and below), of a Tucsonan who died tragically (far too young), as well as a couple of murals in an urban-art style:


When I saw that the building was being refaced, I watched for news of changes. The facade was cleaned, and I waited. A few weeks ago, I found this story on DowntownTucson.org:

Façade Improvement Restores the Pride of 1903 in Chicago Store Building

I rode by the store last week. The walls are Quite White (actually, a light shade of beige or salmon).

The murals were fading, I guess... murals do change... and I understand that people who don't love art like this could have seen the building as an “eyesore.” Tucson moves on. Still — and especially in the story of McKenzie — we've lost a special place to “Façade Improvement.”
Posted by Jerry Peek at 1:38 AM