On July 7, 2008, we published photos by Warren V. of the mural on the Stone Avenue side of the Bates Mansion (283 N. Stone near Franklin).

Two days ago, the Arizona Daily Star article by Ernesto Portillo covered that mural, as well as two others (mostly the magnificent mural inside the mansion that's deteriorating). It said that the murals were painted by Mexican artist Salvador Corona, who was active in Tucson until the 1990s.

Here's the other mural that the article mentioned; it's over the north entrance. You might not call it a “mural” because it's not paint on a wall. I grabbed a photo of it on Sunday so you can make up your own mind: 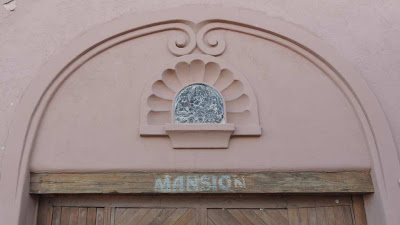 The other Corona mural is actually on the inside of this wall above the door.

After I saw your comment, I searched the Web for a photo of the mural. I didn't find one, but I'll plan to snap one today... I found a notice about today's Corona tardeada at the Mansion. I'll take my camera.

The photo shows a carved bas-relief not a mural. One mural, as Mr. Jacobs correctly states, is on the other side of this gate into the Bates Mansion's courtyard. Another is above entry on Stone Ave. The third, the largest and most important both historically and artistically is inside the Mansion itself, the one that is the focus of the restoration project and today's event. Seth Schindler, Managing Partner of Prudent Preservation Partners, LLC, owner of the Bates Mansion