Murals being made, part 11: King Commemoration

Just in time for Martin Luther King Jr. Day, Tucson illustrator Sabrina Vincent sent photos of the mural she finished this month. It's at the corner of Columbus & Cooper (just south of Broadway):

The mural is tied together with red scarves — and red yarn, as on the part of the mural around the corner to the left. It's a quote from MLK Jr: 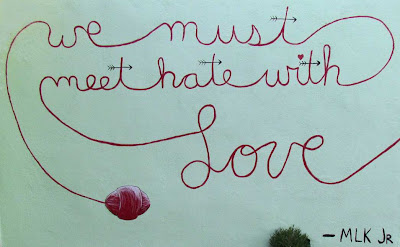 The crossbars on the "t"s are Cupid's arrows — clever, eh? Sabrina is better known as SLOV. Here she (or a fan of hers) appears in the mural: 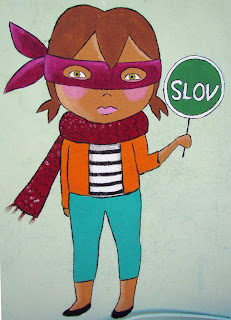 You can see the mural's progress — from an empty wall, to the finished work I showed first above — on her blog SLOVLY. (She shows this mural in her January 7 entry.)

I think she started painting at the end of November. (That's from the camera data inside her first photos.) The last photo was dated January 2.

Thanks for the mural (and the photos), SLOV!
An Arizona Daily Star story, Tucson Oddity: Fanciful mural greets passers-by (April 1, 2013) tells more of the story.
Posted by Jerry Peek at 1:01 AM