Tucson’s second annual Chalk Art Festival started yesterday at Park Place Mall. It's sponsored by the Mall, as well as by merchants there and in other parts of Tucson. Professional artists are making chalk murals on the north side of the mall. At the northwest corner, there's also a “Kids’ Zone” (where anyone can make chalk art... my guess is that you only need to be a kid at heart to “chalk” there): 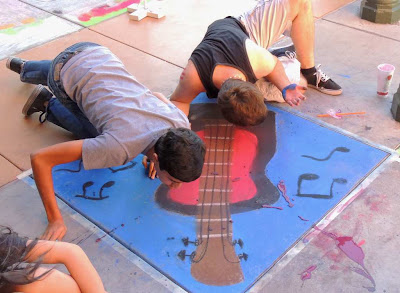 These two “kids” had just spilled their Jamba Juice, and (it turns out that) it doesn't stick to chalk... they found that they could blow it off their mural. :)

I’ll post lots of photos here on Monday or Tuesday. In the meantime, head over to Park Place! The artists are supposed to be there in person today from 11 am to 3 pm.