When the BLX Skate Shop was at the corner of 7th and Toole, it kept its corner fun with a changing mural on the 7th Avenue side. Now BLX has moved to 426 E. 7th Street, just off 4th Avenue. And there's a new mural that hasn't changed for months. Unlike the earlier murals — for obvious reasons — this one doesn't say blocks: 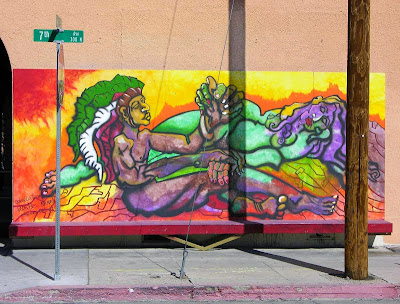 Update (January 12, 2015): There's a mural at the new BLX location but the mural at the old location has been covered over with greenish paint. (I hope you can keep this straight! Art isn't always predictable...)