We've been trying for more than two months — since our first entry on March 11th — to show all of the murals around this place that's basically an art overload (in a good way, of course :). I'll bet there are more murals inside, but I didn't try looking for those. (I've been hoping for a few years now to get permission from TUSD and other schools to photograph murals inside their buildings. But we keep finding so many murals outside other buildings that there never seems to be time.)

This last part of the series shows the far right-hand side of the long wall mural(s) along the alley behind the eegee's on that south side of Speedway. The first of these four shows pretty clearly that eegee's and Dunn Edwards sponsored the mural. (Dunn Edwards contributes to a lot of murals around Tucson. As a result, I try to buy all of my home paint from them. Good people.) 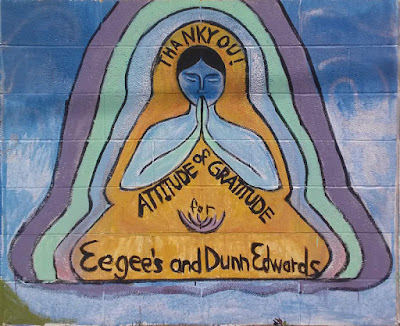 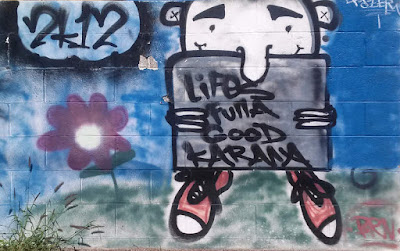 I think that some of those graffiti-like letters aren't artists' initials, but rather taggers trashing these students' exuberant work. Sigh.

P.S. This blog's tenth anniversary is coming in July. Watch for a special series of murals then!
Posted by Jerry Peek at 6:01 AM