From time to time, we come across a flat piece of art that isn't actually painted on the wall. Or maybe it's on a wall, but it has a three-dimensional part. What's a mural purist to do? I don't know about you, but I throw up my hands, say “whatever”… and let you decide what you think. (To me, this question smacks of the typical academic discussion “That isn't art!” “Yes, that is art! Consider [some art expert]’s definition.” I say: If you look it it, and you like it or don't, at least you'll have seen something you haven't before… fairly flat and probably on a wall. ;-) In the meantime… 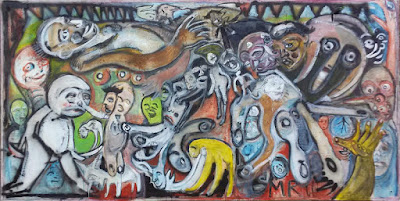 This was on the outside east wall of the building housing George Strasburger's studio, March 5. It was hung on a wooden frame, so who knows when it will go? (I saw it again a few weeks ago.)

Here is a link to the artist that created that mural - http://marcusrobiason.blogspot.com/ . He has a studio in the building where the mural is located (Pleasure World Gallery ); you can google his work by searching for Marcus Robiason - http://4.bp.blogspot.com/-DQC2e5SONfo/VLb5rvS6u4I/AAAAAAAAAQ4/kLdi-3QqMZY/s1600/portrait1.jpg . Perhaps you can give him some credit and link reference as you've done for others that your featured on your site. And I should add that his work is ART and in a sense it is more artistic (pure) than much of the work conformist stylized paintings currently featured on your site.