Back on April 7, 2015, we posted Rock Martinez at 6th & Toole: a video of Rock "CyFi" Martinez painting a mural and a photo of the partly-finished mural. Well, I think it was only partly finished… it stayed there, with no changes (as far as I could tell) until I came back on May 5, 2018, to find: 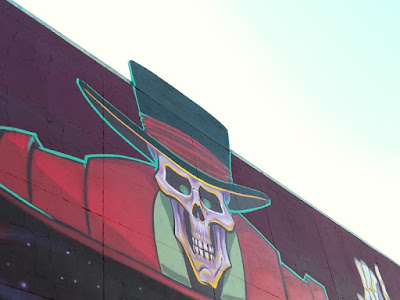 The left half of the wall had been replaced with a mural featuring Tucson's El Tiradito shrine.

I came back on July 27th and got a much better closeup: You can see more photos of this busy wall over time on the section called 197 East Toole of the page Layers of murals: histories of a few walls.