When I met Paco Velez back on March 2nd, he mentioned that he'd be talking that night at the U of A Museum of Art: people would tell stories about living close to a border (the Mexican border and others). It was part of The Border Project: Soundscapes, Landscapes & Lifescapes. (The show's last day is this Sunday, March 11, by the way.) The stories sounded great, so I headed for the museum that evening.

I hadn't been to the museum for a while, so I was surprised by the new mural over the front door: 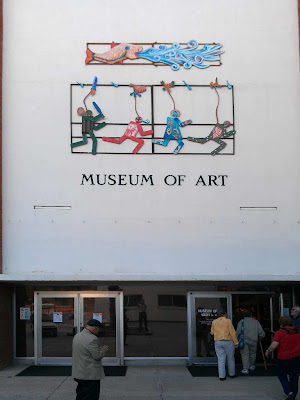 It was in the same style as the mural that went up on the nearby Architecture Buiilding in November. A sign just inside the gallery explained:


Taller Yonke (Guadalupe Serrano and Alberto Morackis) Paseo de Humanidad (Passage of Humanity) 2004 ... represents the parade of people who have migrated away from their homes in search of a better life. Once installed on the Mexican side of the border fence in Nogales, the gigantic aluminum artwork incorporates traditional Aztec and Mayan codices to provide cultural reference for those braving the journey into the United States. The piece also shows migrants returning home, "carrying the rewards and trophies of this perilous journey." As Guadalupe Serrano writes, Paseo de Humanidad is not meant to be political... however it tries to create dialogue between our communities on the complex issue of immigration."