A lot of graffiti is a battle between taggers and the people who try to out-do them... or to clean up their often-artless scrawl. Of course, some is wanted and worth watching for, like the lot on North Stone where Winta Fresh has been held.

And then there's tagging that falls between those two types:

I found this scene last September 22nd, along the alley just across Spring Street from R-Galaxy. The tag at the right side looks to me as if someone painted something on the wall... which someone later covered with gray paint... which someone later topped with a head and shoulders in black. Clever, eh? Farther along the alley (two tags to the left) was another face, this time in white: 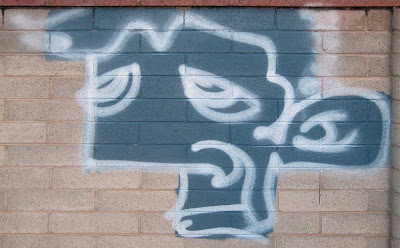