Joe Pagac has (or had) company

Muralist Joe Pagac does a lot of work around Tucson. One of the places he's painted most is the east side of the Rialto Theatre. His concert murals popped up so often there that I gave up even trying to photograph them all (which is a bit sad; they're always great).

Every time I went by in the first half of 2010, he'd have single murals stretching the length of the space (just south of Congress Street as you enter downtown) — like this Patty Griffin mural from March, 2010. In recent months, though, he's had four panels in that space. For instance, here's a photo from two weeks ago, February 18: 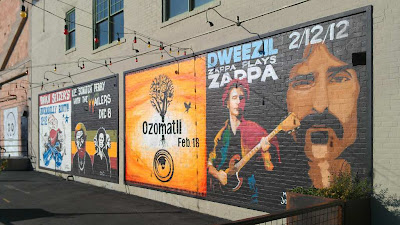 Instead of the usual signature JoePagac.com, the Ozomatli mural was signed Ed Muren III. This was the first work I'd seen of Ed's, but I've found another and I'll post it next: on March 6. (I'll also try to get downtown soon and see whether Joe has done all of the next batch of Rialto murals himself.)
Posted by Jerry Peek at 12:01 AM

The Ozomatli mural looks great! Looking forward to seeing more of Ed's work on the side of the Rialto!