On the Scott Avenue side of Wig-O-Rama, halfway between Congress and Broadway, Jessica Gonzales’ mural started like most of the seven others in the Downtown Murals Project: a blank white wall. It looked like this on May 1st: 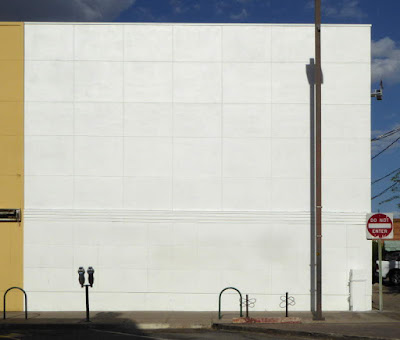 Of course, Jessica is an accomplished artist. (She needed to be to make it through the juried process, cutting the list of possible murals down to 16… then the owners of eight walls choosing their favorites.) But this was her first public artwork! She got right to it. By May 8th, the design was sketched out and around ten colors were filled in: 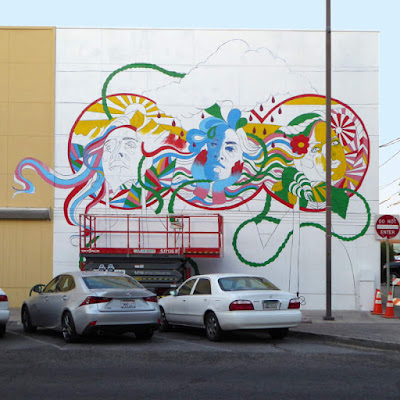 May 14th, the mural looks more than half complete (to me, at least). She seemed to be tweaking the design in a few places… for instance, the yellow color in the tops of the three circles have changed to orange, and the white spaces between the orange are now yellow: 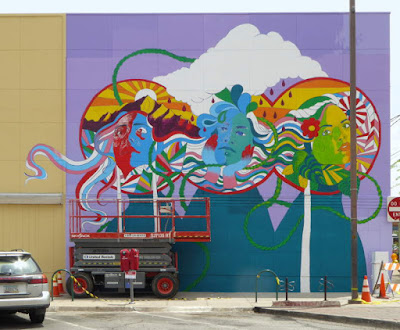 (When I talked with Niki Glen a while ago, she mentioned changing her design a bit as she worked. An artist shouldn't change the design a lot, she pointed out, without asking the owner of the wall. But I can imagine a design changing as the artist sees it close-up, full-sized — instead of the tiny rendering of their original designs.)

When I caught the mural near sunset on May 19th, Jessica had finished more of the detail in the bottom half: 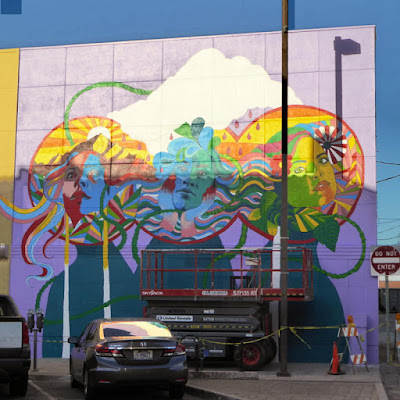 (Note for photographers: I evened out the bright and dark areas with the HDR mode in my camera, then did more darkening and brightening by selecting those areas with the free GIMP editor and applying color Curves to each. I tried balancing the brightness even more than this, but the photo looked a bit unreal.)

On May 30th, Jessica had signed the mural (at the bottom right). The bottom had black outlines that I wasn't sure she was planning to fill in: 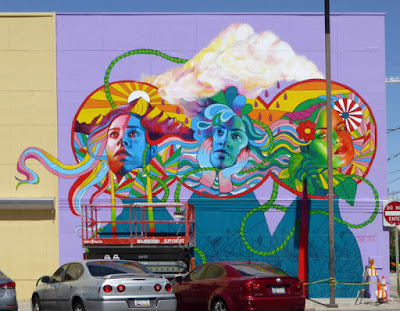 I guess the mural is done! The June 16th article in the Star has a photo that looks the same as my June 4th photo: 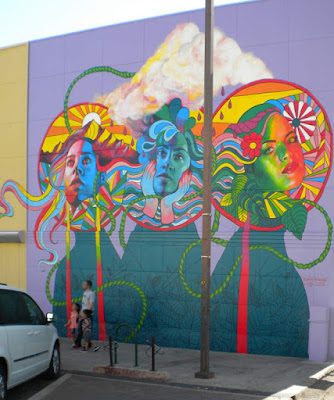 (The barriers and hydraulic lift are gone, too.) A happy family is posing in front. (I've blurred their faces for privacy.)

Here's the tentative design shown at the Downtown Mural Project design open house April 26th. I snapped a photo from a small piece of paper on a table, so the color differences may be due to my camera, not to a change in Jessica's design: 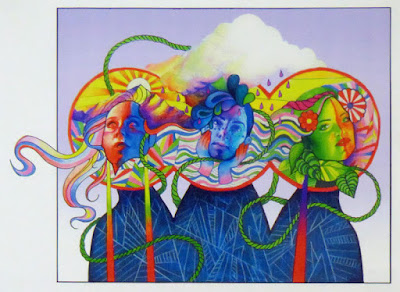 There are five more new downtown murals to cover. See you on Thursday!

Between the third and fourth photos, Jerry refers to Nicki Glen. The comment confused me at first because the mural's artist is Jessica Gonzales. But then I realized he was simply using the comments of another artist to explain why, and how, changes are made to a mural in progress. Duh.

"Let The Light In" is the name Jessica has chosen for her mural.