Yesterday, I saw a photo and tweet about a new mural: 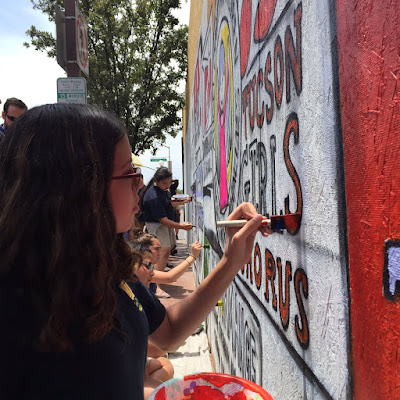 (Blogger didn't want me to use Twitter's “Embed Tweet” feature, so I copied the photo and made a screen grab of the tweet.) Anyway, I tweeted back to Becky to ask where the mural was. But then I zooomed in on the photo and saw a “Congress Street” sign in the background, which was a good clue. I was downtown this evening; I found the mural just after sunset, across 6th Avenue from the Ronstadt Transit Center, just north of Congress:

The “imago dei” at the right side was enough to lead me to this Facebook entry from Imago Dei Middle School:


The exuberant students on the right side of the mural echo a photo of graduates at the top of the IMDS Facebook page.

The mural looks to be on a construction wall in front of the old “The Arizona Hotel” (which I found on a Google Street View image from April 2015). So, see it while you can.