Rock “Cyfi” Martinez’ 55-foot-high mural along 7th Avenue just south of busy 6th Street has made him even more of a celebrity than he already was. (He's been painting murals in Tucson for years — after he was caught, and fined $11,000, for illegal tagging.) There's more in the 2008 Tucson Citizen article Denogean: From tagging to legitimate artwork and a 2010 Arizona Public Media report on graffiti.

So let's jump in and see the mural taking shape. May 1st showed no sign of the mural… just a Benjamin Supply banner: 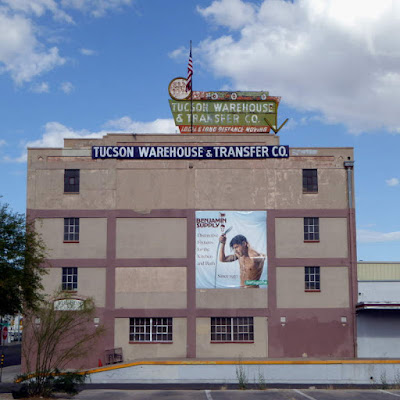 Fast-forward a week to May 8th near sunset. Unlike most other murals, it looks as if Rock applied his own primer coat. (That's because the finished mural wouldn't cover the entire front of the building.) Also, unlike other artists, Rock has sketched some, painted some — instead of sketching the whole thing ahead, possibly at night with a projector. 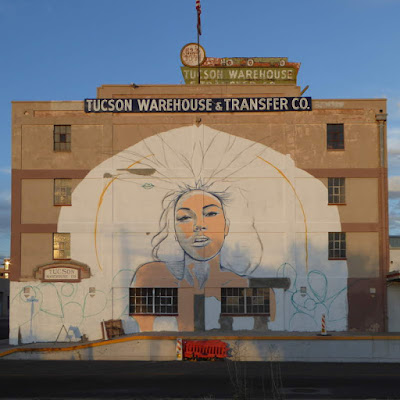 On May 10th, I was riding by with a friend, saw Rock walking along the front of his mural, asked her to slow down, grabbed a photo (sorry, Rock, not a very good one) and then we kept going. I'm showing the photo here because some sketched-in areas from the photo above now have some color: 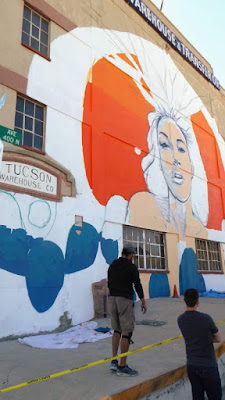 (By the way, I saw a photo in last week's Arizona Daily Star article showing that the woman in the center of the mural is Rock's girlfriend Brandi Watkins.)

Four days later, May 14th,there's a dark blue ring and a painted agave: 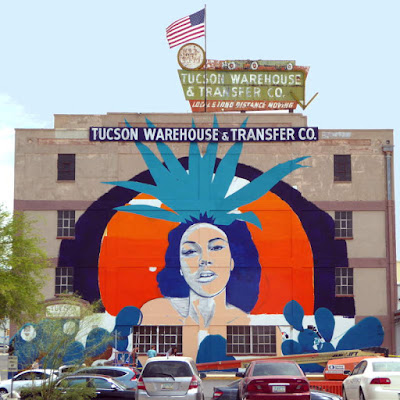 Here's a closeup of the bottom left corner on May 15th. The main change was more detail in the prickly pear cactus pads: 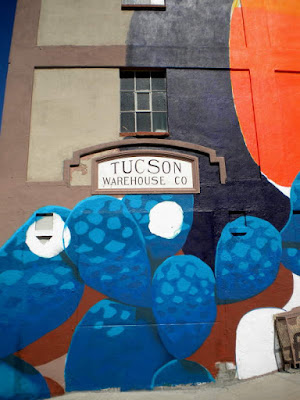 May 19th (in higher contrast, to show more detail) the prickly pear pads and the dark ring have texture, and orange saguaro grace both sides of the mural: 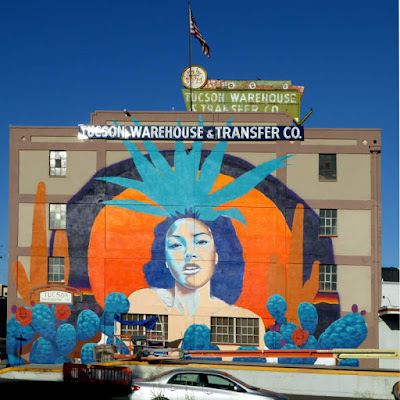 A week and a half later, May 30th, the mural is looking basically finished to me. But the hydraulic lift is still there, and the mural hasn't been signed. Anyway, here are a photo of the mural and a photo of Rock with someone — maybe Cristina Perez, who worked with him: 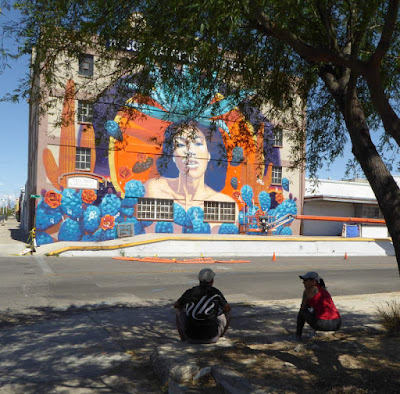 When I stopped by during the day on June 4th, the mural had been signed at the top right corner (with more near the bottom right): 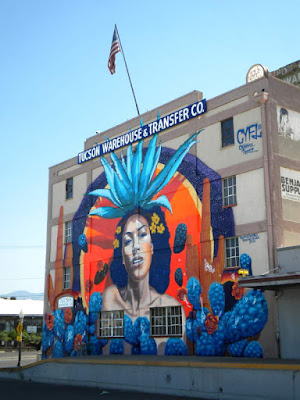 (Note for photographers: The mural was in shadow, but I used the free GIMP editor Intelligent Scissors tool to select the front of the building and the Curves tool to brighten it.)

Just for comparison, here's a photo from Rock's introductory proposal at the open house on April 26th: 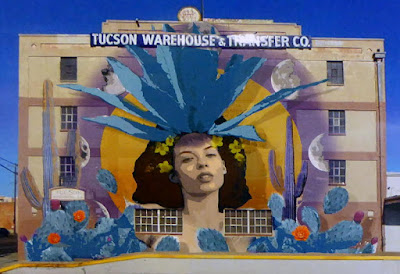 Those designs weren't meant to be final, but I thought you might want to check the differences!

I came back on the evening of June 4th, in twilight, and found the mural lit spectacularly: 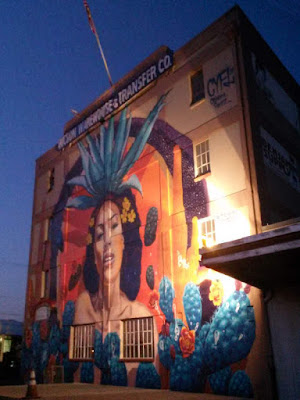 Next week, we're on to the other half of the murals — the second four murals of the eight.

Update (September 17, 2016): In the middle of Rock's Pinterest page right now is a photo of the mural from above (while he was painting from the big hydraulic lift).

Update: The aerial photo below from BG Boyd Photo gives an overall view: 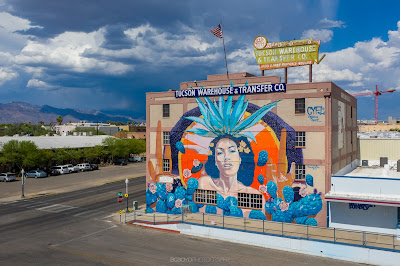 Rock has named his mural the "Goddess of Agave".