There used to be a skateboard shop named BLX on this corner. They had different local artists paint a mural, every month or two, behind a skate-able bench. You could jump your board onto the bench and ride across the front of the mural.

If you'd like to see the BLX murals, use the mural search box (at the right side of this blog — or, more reliably, the box near the top of the TucsonArt.info murals page)… then search for BLX. 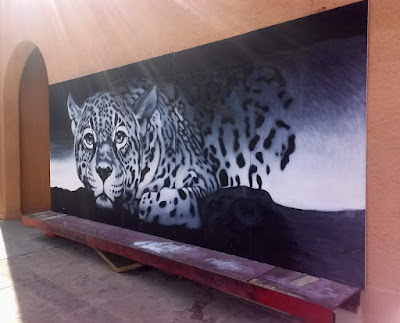 BLX is gone. (Last I saw their place, they'd moved closer to 4th Avenue.) Their (literally! :) rotating murals are gone, too. In their place for the past months — starting, at least, when I snapped this photo on March 5th — is this menacing (I'm pretty sure it's a) leopard. (I made my guess by doing a Bing Images search for leopard jaguar panther difference.)

I don't think I'd be too comfortable riding a board past that. :)

Update (June 17, 2016): The Arizona Daily Star article 9 new murals in downtown scream TUCSON has a long sidebar with much more information about the mural and artist Kati Astraeir (who — at least, a couple of years ago — had a studio in that building… see her amazing rotating artwork for Burning Man at the end of our blog entry here: New on Toole in 2013 (and Happy 2014!)). Although Kati's mural was included in the article as one of the new downtown murals, the article didn't include other recent murals downtown — for instance, Joe Pagac's mural, and another artist's stencils, commemorating Prince. Whatever… the article has lots of great information about muralists and their work downtown.
Update (December 2, 2017): I just found the Center for Biological Diversity 2016 page about this mural's unveiling: Tucson Mural Honoring America's Only Known Jaguar to Be Unveiled May 19.
Update (August 19, 2019): The mural is gone; there's just a rough patch of wall in its place.